Our diligent and effective team provides excellent representation and vigorous advocacy. We negotiate for fair benefits and wages. We fight to get justice for those who have suffered harassment or discrimination based on disability, age, gender, race, religion, sex, sexual orientation, ethnicity or national origin. We also represent whistleblowers, employees who have been retaliated against for standing up for their rights and the rights of their coworkers, who have reported illegal conduct, or refused to participate in illegal and unethical practices.

Ronald P. Ackerman has dedicated his practice to the representation of public employees. After earning his Bachelor’s Degree from Brooklyn College, Mr. Ackerman entered the Federal Service as a Special Agent, assigned to enforcing Immigration laws.  The agency was later absorbed by the Department of Homeland Security. While working as a Special Agent, Mr. Ackerman took on a leadership role in his union, the American Federation of Government Employees, representing I.N.S. employees. He held various elected union offices including Local President, and National Vice President.  He also handled labor arbitrations, union grievances, labor negotiations, and lobbying efforts.  After years of handling union matters, Mr. Ackerman earned his J.D. Degree from Southwestern Law School in Los Angeles and was thereafter admitted to the California Bar.

Mr. Ackerman has since had his own practice representing federal and other public sector employees.  Mr. Ackerman’s experience as both a federal law enforcement officer and a union representative made him uniquely qualified to represent these clients.  Today Mr. Ackerman represents federal employees across the country.  Mr. Ackerman regularly represents employees in administrative hearings before the Equal Employment Opportunity Commission and the Merit Systems Protection Board.  He also litigates federal employment cases in U.S. District Courts as well as Federal Circuit Courts of Appeals. Mr. Ackerman has a number of successful, published decisions both before the Merit Systems Protection Board and the Equal Employment Opportunity Commission. 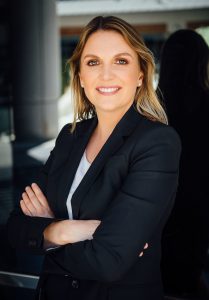 Vasili Brasinikas is an attorney for Public Employees Legal. Upon earning Bachelor of Arts degrees in History/Political Science and Communication from Vanguard University of Southern California in 2014, Vasili Brasinikas attended Emory University School of Law in Atlanta, GA, where he worked at the Volunteer Clinic for Veterans. During law school, Mr. Brasinikas worked for the Georgia Public Defender Council and a private firm in the intellectual property division. He also served on the executive board for the Emory Law Moot Court Society.

Mr. Brasinikas is admitted to practice law in California.

Shelby Miner is an attorney for Public Employees Legal. Ms. Miner graduated from the University of Minnesota – Twin Cities in 2014 with degrees in Anthropology, Communications, and Leadership. She earned her law degree from UCLA School of Law, where she received a specialization in Tax Law, and published an article regarding Use Tax and the changes that should occur in that area of law. While studying at UCLA, Ms. Miner worked for the District Attorney’s Office, the Court of Appeals, and a private firm.

Ms. Miner is admitted to practice law in California and Minnesota. She is also a member of the National Lawyers Guild, the California Employment Lawyers Association, the Consumer Attorneys Association of Los Angeles, and the Los Angeles Bar Association.

Nicole Meyers is an attorney with Public Employees Legal.  Her practice focuses on representing employees before administrative agencies and in litigation.

Prior to joining the firm, Ms. Meyers served as a judicial law clerk to the Honorable Otis D. Wright II of the United States District Court for the Central District of California.

Ms. Meyers is a graduate of Southwestern Law School.  While attending law school, Ms. Meyers was a Board member for the Moot Court Honors Program and wrote the winning brief at the 32nd Annual Dean Jerome Prince Evidence Moot Court Competition in New York.  She also served as Co-President of the Black Law Students Association.  Prior to law school, Nicole attended the University of California Los Angeles, where she earned a Bachelor of Arts in Theatre.

Ms. Meyers is admitted to practice law in California and New York.