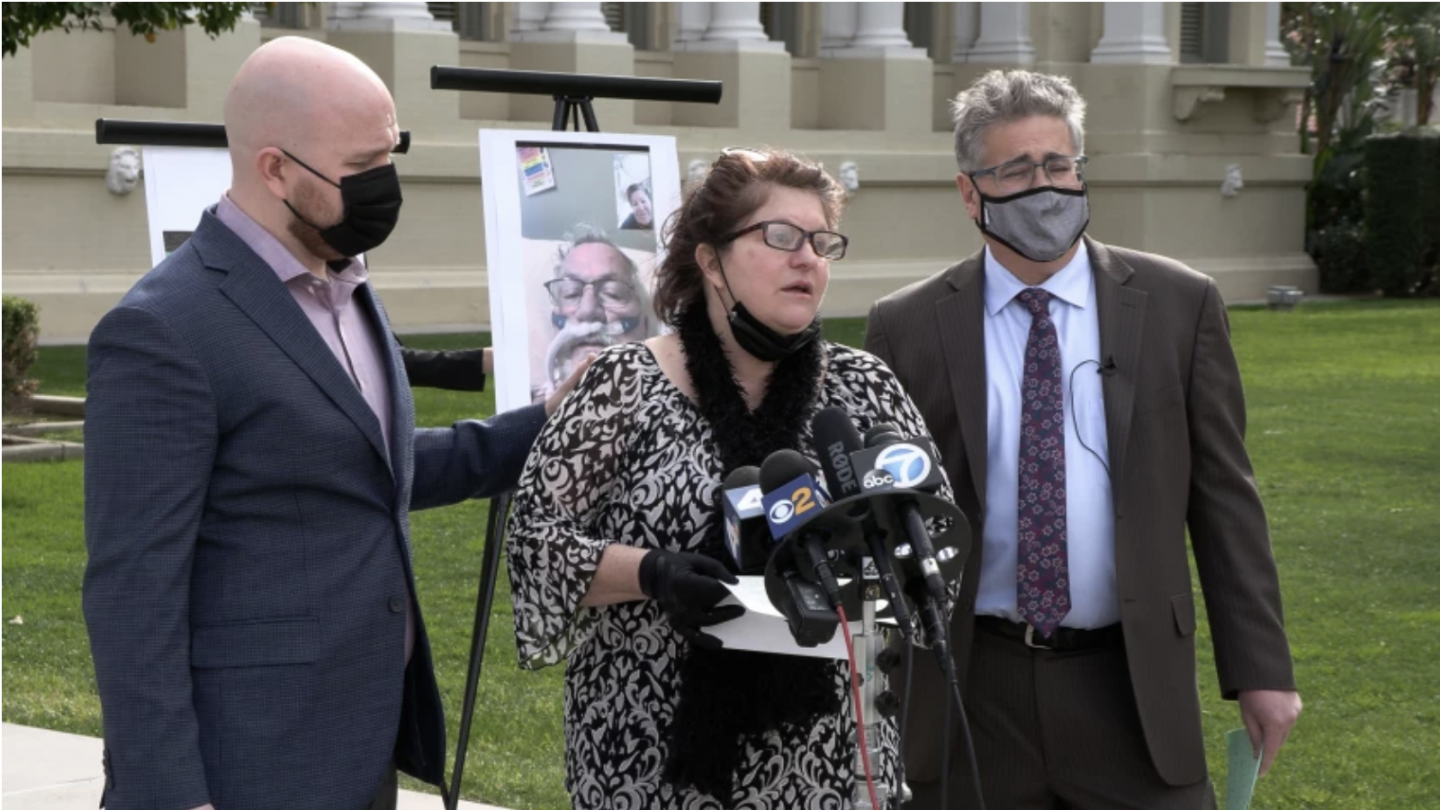 The family of a longtime Riverside County employee who died of COVID-19 last year has filed a wrongful-death and disability discrimination lawsuit alleging his supervisors ignored his requests to work from home and failed to enforce pandemic safety protocols.

Michael Haywood, 61, died Feb. 2, more than a month after developing symptoms. A two-time cancer survivor who also had high blood pressure and used an inhaler, Haywood feared for his safety and was concerned about infecting his wife, Elizabeth, who suffers from autoimmune conditions, according to the lawsuit, which was filed this week. He was also diagnosed with diabetes after he was hospitalized with COVID-19.

She tested positive for the coronavirus shortly after her husband was hospitalized and “continues to suffer from long-haul, debilitating symptoms,” according to the lawsuit.

“Mike was a great guy,” Elizabeth Haywood, 55, told The Times on Tuesday. “He was just the kind of man who could do anything. … There would be days — there still are — where I can’t get out of bed, and he would bring everything I needed, took care of me. He took care of everybody. He helped me take care of my mom and dad.”

Before he fell ill, Haywood was looking forward to retiring. The couple talked about buying a recreational vehicle, selling his car and getting a truck, his wife said. They planned to travel and see family.

“He was really looking forward to that,” Elizabeth said, fighting back tears. “He worked so hard his whole life and to have that taken away from him … I’m upset because he talked about his work and he talked about sharing the office.”

At the time of his death, he was the equipment service supervisor for the Riverside County Flood Control and Water Conservation District, according to the lawsuit.

The county allowed some employees, including two of Haywood’s supervisors, to work from home at least part of the week beginning in March 2020, but Haywood was required to work in person even though he primarily had administrative duties, the suit alleges.

He shared an office with no windows and poor ventilation with a colleague and worked close by other employees who shared common areas “but did not regularly wear face masks over their mouth and nose,” according to the suit.

From March to December 2020, Haywood repeatedly raised concerns to his supervisors, telling them that he and his wife had health conditions that put them at increased risk of serious illness or death from COVID-19, according to the suit.

He asked to work remotely until he was vaccinated but was denied. He also asked for precautions such as masking, distancing and employee screening, and for a staggered work schedule so he and a co-worker wouldn’t have to share an office.

Those requests were also denied.

The county continued to allow employees to gather indoors without masks and without temperature or symptom screening, even as state officials issued a second stay-at-home order in late November 2020 and a regional stay-at-home order for Southern California early the next month.

The county “took no additional steps in response to the state of California’s orders, or the alarming trends identified by its own Department of Public Health,” according to the suit. “It did not act to protect Mr. Haywood from exposure to COVID-19 in the office or implement a process for protecting vulnerable individuals living in its employees’ homes, including Mrs. Haywood, from exposure to ‘take home’ COVID-19 infections.”

In October 2020, Haywood attended an indoor meeting in which no other employees wore masks, according to the suit. He later learned that one of his supervisors who was at the meeting tested positive for the coronavirus.

After the exposure, he was allowed to work from home while quarantining for two weeks, “underscoring both the appropriateness of his continued requests to work remotely and Mr. Haywood’s ability to perform his job remotely,” according to the suit.

He was required to return to the office after the quarantine period, the suit said.

On Dec. 17, three days after first falling ill, Haywood tested positive for the coronavirus, according to the suit. That day, contact tracers determined he’d been exposed to the coronavirus at his office. He was hospitalized on Christmas Day.

Multiple employees were quarantined, but the county didn’t report Haywood’s illness to the California Division of Occupational Safety and Health until Dec. 28, according to the suit.

Elizabeth recovered from her initial bout with COVID-19 but was left with lingering symptoms including brain fog, shortness of breath, panic attacks, vertigo and heart palpitations — signs of “long COVID,” according to the suit.

DeSimone, the family’s attorney, said that California law requires employers to make reasonable accommodations for employees with disabilities and that those accommodations should have been provided to Haywood given his and his wife’s medical conditions.

“Here we had an equipment parts supervisor who could do the majority of his work from home. … Some of this is just commonsense solutions to the problem at hand,” he said.

In a statement, county officials said they were saddened by Haywood’s death. They said the county had not received the lawsuit and could not discuss pending litigation.

“The county takes necessary coronavirus precautions … [including] working closely with all county departments, local and state public health officials and CalOSHA to ensure best practices are followed for the safety and wellbeing of county employees,” the statement said.

Elizabeth and Michael Haywood had four children: two sons from his previous marriage and two children of their own, his wife said. At the time of his death they had 10 grandchildren. An 11th was born a few months ago.

Dustin, one of their sons, said he and his father would speak often about his plans for retirement. His father could fix anything — working constantly to maintain his home and family cars — and had picked up a new hobby: fixing and reselling pinball machines, Dustin said.

“He was really looking forward to doing that in his retirement years,” Dustin said. “My dad, you know, when he was on vacation, that’s when we saw his true self come out … because he didn’t have the stress of the world on his shoulders.”

Dustin, 31, said he and his father shared many experiences he treasures. They went ziplining at Lake Tahoe, wine tasting and skydiving.

Dustin, who worked as an EMT, now lives in Washington state and is going to nursing school.

He’s been haunted by thoughts of what his father went through while hospitalized.

“It hurt me knowing that my dad had to go through this, struggling to breathe for days on end with COVID,” Dustin said. “I’ve seen young kids and older people and everybody in between who’ve struggled with this disease. … It’s hard to know that my dad, those were his last moments. That’s something that was preventable.”

He and his mother said they want COVID-19 protocols to be followed and for employers to listen to public health directives from the Centers for Disease Control and Prevention and local authorities.

As she spoke, Elizabeth Haywood’s voice choked with emotion, the loss of her husband still raw.

“My life will never be the same,” she said.

Our Case is in the news

California Employment Laws to Go Into Effect in 2022