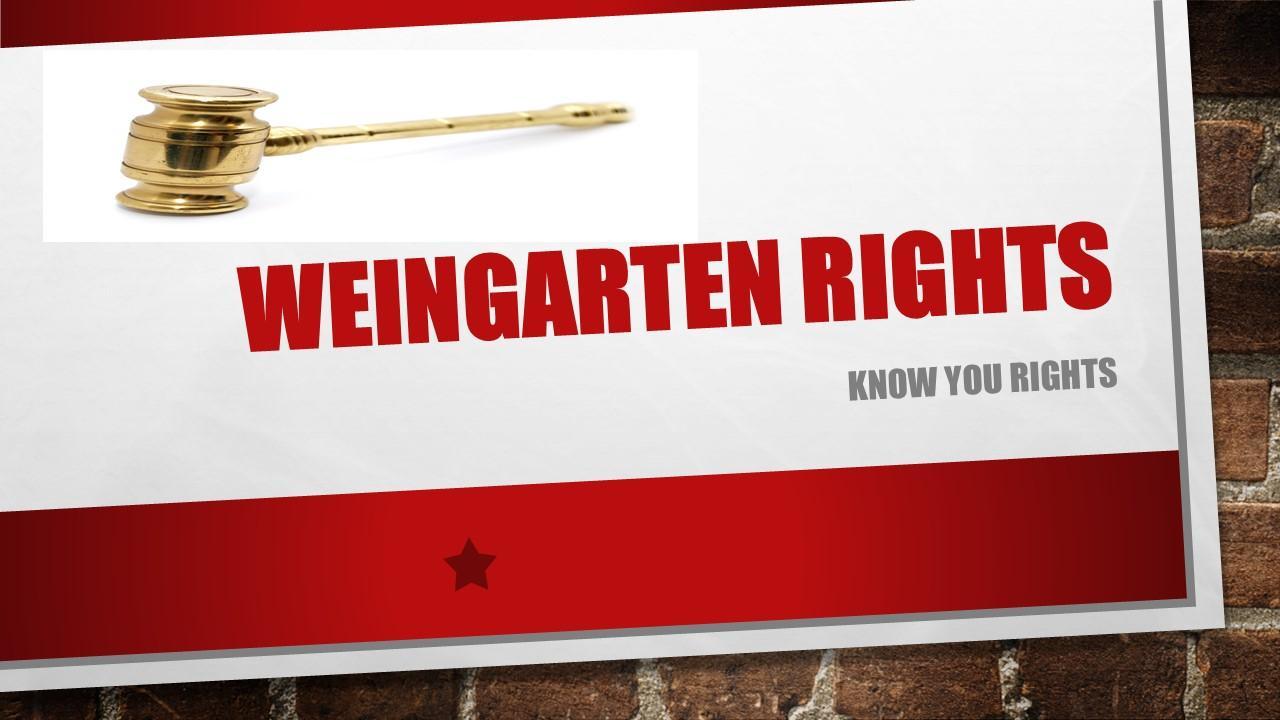 WEINGARTEN RIGHTS – WHEN ARE THEY IMPLICATED?

If you are a union member, you have a right to have union representation at any interview or meeting that you reasonably believe may lead to discipline or “at which the employer seeks information to enable it to impose discipline or termination.” The Supreme Court case of National Labor Relations Board v. Weingarten, decided in 1975, established this basic entitlement and the procedures for when and how union reps may participate in interviews. Collectively, these rules are referred to as “Weingarten rights.”

The actual lawsuit that led to the establishment of Weingarten rights involved an employee at a lunch counter. Laura Collins was accused of stealing and was interviewed by the store manager and a loss prevention specialist. The company believed Collins had taken a large box of chicken but paid only for a small box. Collins said she took only four pieces of chicken – the amount customers receive in a small box – but had to put it in a large box because the store was out of small boxes. Her story checked out, and Collins was cleared.

From these humble facts, Weingarten rights were born. During the interview, Collins asked several times for her union rep or shop steward, but the company wouldn’t grant her request. Although management asked Collins to keep the interview to herself, Collins told her shop steward about it and the union filed an unfair labor practice charge against the company. Ultimately, the Supreme Court decided that an employee is entitled to union representation for investigatory interviews.

To establish a violation of the right to representation in an investigatory or disciplinary interview, the charging party must demonstrate each of the following:

(2)       The right was invoked for an investigatory meeting.

(3)       The employee reasonably believed the meeting might result in disciplinary action.

Disciplinary or Investigative Meetings or Interviews

The right to representation attaches in a disciplinary interview, whether it is so labeled or not. A disciplinary or investigative meeting or interview is one:

Regardless of how a meeting may be characterized or envisioned by management, if it serves to elicit incriminating evidence with the potential to impact the employment relationship, it is “investigatory” for the purposes of the representational rights under Weingarten.

The right to representation is not limited to investigatory or disciplinary interviews. Weingarten rights can also apply to a non-investigatory meeting where there is a reasonable basis for believing that disciplinary action will result.

Examples of non-disciplinary situations in which the right to representation has been held to exist include the informal conference level of a grievance procedure, an interactive process meeting, a meeting to review a negative performance evaluation, a meeting to discuss disputed contractual leave entitlements, a post-termination hearing before a school board, in meetings concerning salary adjustments or classification changes, and at an interactive process meeting to discuss reasonable accommodation of a disability under the federal Americans with Disabilities Act or its California analog, the Fair Employment and Housing Act.

However, no right of representation exists if the interview is merely to inform the employee of previously determined discipline. There is no right to representation when the purpose of the meeting is simply to deliver notice of the discipline and not to elicit damaging facts from the employee or to consider modification of the discipline. For example, in State of California (Board of Equalization), the Public Employee Relations Board (PERB) held that a meeting conducted for the purpose of reviewing the interactions between an employee and his supervisor and to provide instruction to the employee regarding those interactions was not an investigatory interview; the supervisor was not seeking to support a case for discipline and no discipline resulted from the meeting.

Finally, the right to representation in non-disciplinary meetings and interviews does not exist for “routine conversations giving instructions, training, or correcting work techniques,” or when an employee is presented with “most routine or perfunctory documents.” There is also no right to union representation for an employee subject to an investigation into allegations of retaliation under the state whistleblower statute or for an investigatory meeting concerning another employee’s conduct where the employee questioned is a witness to the incident.

How to invoke your Weingarten Rights

You can invoke your Weingarten Rights by saying the following:

“If this discussion could in any way lead to my being disciplined or terminated, or cause an effect on my personal working conditions, I respectfully request that my union representative be present at the meeting. Until my representation arrives, I choose not to participate in this discussion.”

Even if it is later determined that the employee was not entitled to have a union representative, the request for representation is protected activity.

If you are a union employee and believe your right to representation was wrongfully denied under Weingarten, you may want to speak to an attorney. You could be entitled to an order purging the imposed discipline or other appropriate remedial action. An experienced employment attorney can assess the facts of your potential case and discuss the options available to you.